From shouters to chanteuses, R&B melisma to the high lonesome sound of bluegrass, this week we bring you some of the biggest voices on the American soundscape. Neo-retro vocalist k.d. lang comes by to talk about her loves and influences from 50’s country to smoky lounge music. New Orleans singer Topsy Chapman tells us how a stint as a singing waitress on Bourbon Street and growing up with 15 siblings led her to an international career as a song stylist. 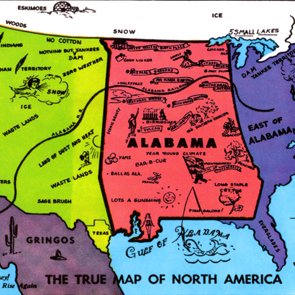 American Routes takes a trip through the music of the Yellowhammer State—Alabama. Visit the Muscle Shoals Sound studio and find out what’s in the water around “the Shoals” to make it a historic hotbed for R&B hits by Wilson Pickett, Aretha Franklin and more. Also, a trip through Hank Williams’ childhood home in Georgiana, and W.C. Handy Music Festival in Florence. And music from Shelby Lynne, the Birmingham Sunlights and the Delmore Brothers.

From the earliest blues and minstrel tunes to clawhammer bluegrass and forward to newgrass, the banjo has been a part of American music. This week we visit with New Orleans Creole jazzman Don Vappie and hear how the instrument is used in New Orleans traditional jazz. And feel the zeitgeist as San Diego-based Nickel Creek come by for a live set and talk about building onto their bluegrass base and moving beyond.

Find the connections between the literary landscape and soundscape. We talk with Columbia University jazz scholar Robert O’Meally about the music writings of the Harlem Renaissance author best known for the novel Invisible Man, Ralph Ellison. And visit with songsmith and wordsmith James Talley.

RED, WHITE AND BLUES: THE SOUNDS OF PATRIOTIC PLURALISM

Music and opinion on patriotism as pluralism, and sometimes protest, from guests Merle Haggard and Joan Baez. Plus blues and New Orleans jazz versions of classic freedom songs. Also American anthems from the late King of Bluegrass Jimmy Martin and the Grateful Dead. Then we’re off on a summer road trip to sample Ted Drewes’ Frozen Custard at his venerable stand on Route 66 in St. Louis, and play “Drown the Clown” at a Massachusetts county fair. Join us for a star spangled edition of American Routes.